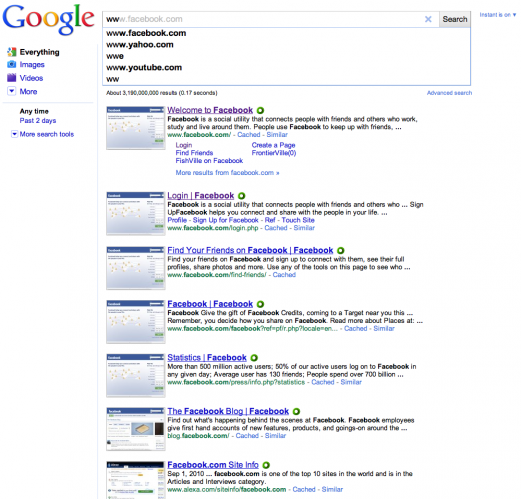 Google Instant Search is here, and over the last couple days there has been much hurrah about the sites that Google now loads directly into the results as you type, even after you've only typed in a single letter. Fast Company and Mashable have written about it. And before them, the Huffington Post wrote about it. And eight months before that, this little blog wrote about it. (By the way, the Huffington Post was nice enough to link back to us, so hats off to them!)

If you're interested, check out Google One-letter Suggestions, where we analyzed the first 10 results for each letter (unlike these other publications who only look at the first result) and found some interesting trends back in December.

You see, these instant suggestions have been around for the better part of the year, before Google introduced Instant Search. Instead of loading the pages instantly as you typed though, it merely suggested search terms as you typed. In a way, Instant Search is actually the second step in a gradual release. The first step (the search term suggestions) meant you didn't have to finish typing your search query, and the second step takes it just one step further, eliminating the need to hit 'Enter'.

But what I really want to bring up is something I can't believe none of the other major publications picked up on. This is the thing that I found the most interesting out of the entire analysis. If you type the letter "w" into Google, one of your top ten search suggestions is Facebook! Facebook? Yes, apparently enough people type "www.facebook.com" into Google that Facebook is a top-ten result for the letter "w".

As of this writing, Facebook does not make the cut for the letter "w" in Instant Search results. However, if you type "ww" into Google's Instant Search, here are the top 10 results (your results may vary):

All of them are related to Facebook, 8 of the 10 are actually owned by Facebook, and 3 of them don't even start with "ww"!

After writing this (but before publishing), Google released this post about the how Instant Search actually works. The reason the results are all Facebook links in the example above is because the gray text in the search box has auto-completed my "ww" with "w.facebook.com", which in turn is returning all the Facebook results. While this does make a bit more sense, the potential effects remain. Read on...

Think about that. Of ALL the other words that start with "w", a sizable portion of search users go on to continue typing "www.facebook.com". And of ALL the other websites on the web that start with "www", Facebook is so popular, or at least popular among people who like to use Google in place of their browser's URL bar (and we've all seen how prevalent those users actually are), that it takes a top-ten spot in the "w" suggestions (and "ww" Instant results) without actually starting with the letter, "w".

This could have some really interesting implications for Google's search and suggest algorithms. I had pointed out on a social news site called Hacker News that Instant Search would really only affect those who don't know what they're searching for. Another user further refined my thoughts (thanks, user acqq!), saying this:

Correct: there's real chance I'll forget what I wanted to search if I'm presented with something else shiny before! It's dangerous and it will mostly make popular searches even more popular. It's a positive feedback loop, often a bad thing. [emphasis added]

What this user means by "positive feedback loop" is that, as people start typing their search term/phrase, these results will now start populating right in front of their eyes. These results of course are being populated by Google's database of the most popular search phrases that match what you've started typing. If you click on one of these suggestions before you've finished typing, you've now made that suggested search term more popular, and thus increased the chances that other people will receive the same suggestion. As a result, popular search terms become more popular, and unpopular search terms become more unpopular.

But we're not just talking about search term suggestions now, we're talking about actual search results with Instant Search. Suddenly, it's not just Google's search term suggestion database that becomes more polarized with a greater divide between popular and unpopular search results. Now, the popularity of the websites themselves are a part of this positive feedback loop.

So, what does this mean? It means that Facebook will move even higher in the results for the letter "w" unless Google does something, either in the way they return instant results or in the way their suggestion algorithm works. Now, users don't have to type "www.facebook.com" into Google to get to Facebook; they can just type "ww" and click Facebook in the Instant results, which tells Google that Facebook is a more relevant result for the letter "w", which makes Google move it higher in the suggestions, and the whole cycle starts again.

Is this really any cause for alarm? I would say, no. After all, this is what Google does. And who are we kidding, they've probably already figured this out.

Anyway, who's to say that Facebook moving higher up the results for "w" is a bad thing anyway? If that's what the users want, then doesn't that simply make Google more usable for a larger percentage of the web-going audience? Well, yes it does, but it does so at the expense of usability for the [hopefully increasing] number of sophisticated web users (and by sophisticated, I mean the users who actually use Google to search for stuff). Maybe this is an opportunity for a search engine geared toward sophisticated web users.

In fact, we already have DuckDuckGo moving in that direction. From my limited experience using DuckDuckGo, it appears it does not even auto-suggest search terms until you've used it a few times, at which point it simply auto-suggests terms from your own history (someone correct me if I'm mistaken), thereby avoidng this cross-user positive-feedback loop.

At any rate, I'm excited to see what the world of search and recommendation has in store for us in the future.