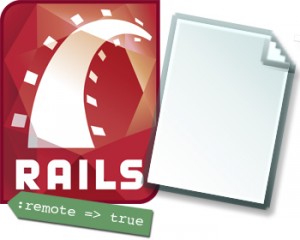 In my last article, we discussed the difficulties of file-uploads via AJAX, and how the iFrame method works around the issues to provide an AJAX-like interface for uploading files to the server.

So how does this relate to Rails?

Rails 3 uses Unobtrusive JavaScript for remote links and forms (and comes packaged with the jquery-ujs driver via the jquery-rails gem as of Rails 3.1!). However, because jquery-ujs relies on jQuery's standard `.ajax()` function, it is incapable of doing AJAX file uploads.

Remotipart to the rescue! The Remotipart gem does two things:

If you're curious about the name, it's a contraction of "remote" and "multipart", as in multipart forms for file uploading. Pronounced remote-ee-part.

Update: Newer versions have been released since this post. See the Remotipart homepage for the most up-to-date info.

I just released Remotipart version 0.4, re-written to work seamlessly with Rails 3 apps. Among other conveniences, this makes installation much simpler. Also, for Rails 3.1 apps, it now works with the built-in asset pipeline.

For installation, documentation, and demos, check out the new Remotipart homepage:

Because we've opened up jquery-ujs's internal functions to be interactive and configurable, it is now easy to augment and build plugins on top of jquery-ujs. Check out the Remotipart source on Github to see this capability in action.