Rails, Prototype, and JQuery in Harmony (or how to replace Prototype with JQuery) 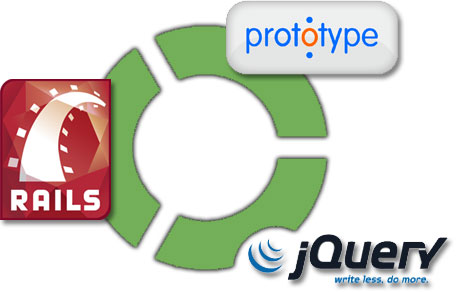 It has become common practice to use JQuery as the javascript library of choice for Ruby on Rails applications. If you have a Rails app already using Prototype, it usually isn't feasible to replace it in one swoop. And sometimes, you just simply need both to work at the same time. Whether you want to use both in unison (not recommended as a long-term strategy), or you want to gradually migrate from Prototype to JQuery, it's not as scary as you may think.

First, in our application layout, we're going to get rid of `<%=javascript_include_tag :defaults %>` and include each javascript file explicitly just to make things a little less magicky and a little more straight forward.

Now, we'll add in JQuery (and JQuery UI while we're at it, just for fun). You'll want to grab the latest release from the JQuery download page (and the latest JQuery UI as well).

Right under that line, in your Rails application layout, we'll insert the one-liner that makes JQuery play nicely with Prototype, YUI, etc.

Try doing this with Prototype (especially if you're using other scripts built on top of Prototype and Scriptaculous), and you'll soon find yourself pulling out your hair.

If you simply want the ability to use both libraries together in your app, then congratulations, you're done. You can now do this:

Make Rails Use JQuery Instead of Prototype

Update: This is actually even easier now with Rails 3. All you have to do is tell Rails to use the jQuery API javascript file instead of the Prototype API javascript file. See this Rails3-jQuery project on Github for using jQuery natively with a Rails 3 application.

Let's assume that we'd like to phase Prototype out of our app in favor of JQuery. In addition to going through your application and replacing all of your Prototype code with JQuery code, you'll need to take care of the Rails Prototype helper magic (note that when Rails 3 becomes the standard, this won't be necessary).

This is really easy, thanks to the JRails plugin, which can be found on Github. Install it in your Rails project from your root directory.

Now, your Rails helpers, such as `link_to_remote`, `form_remote_tag`, etc. are using JQuery to build the AJAX code instead of Prototype on the back end. Isn't Rails magic neat?

Update: If you are trying to get delayed observer to work with jQuery in a Rails 3 application, see my comment below.

There is one more step if you're using the `observe_form` helper method. This helper relies on Prototype's `Element.observe` method, which does not exist in the standard JQuery library.

No worries, someone has done the work for you already (not me). Just download and include the JQuery delayed observer plugin in your layout, and you're all set.

Boot Prototype Once and For All

And just to celebrate, remove the `var $j = jQuery.noConflict();` line from your application layout, and do a Find and Replace All `$j` with `$` for your project. You have now ditched Prototype once and for all.